As stated by David Quammen, “the story of the dodo is obscured by a fog of uncertainties.” By about 1690, if not earlier, it was extinct in its area of endemism, Mauritius. Starting around 1500 with the arrival of Europeans, Mauritius, Rodrigues, and Réunion in the Indian Ocean lost 33 species of birds, including the dodo, 30 species of land snails, and 11 reptiles.

As other large pigeons, especially on islands, dodos probably relied extensively on fruit food. A famous iconic story relates the extinction of dodos, to the almost co-extinction of a seemingly preferred fruiting tree, Sideroxylon grandifolium (formerly Calvaria major, Sapotaceae, the tambalacoque tree), thought to have relied exclusively on these birds for seed dispersal. The tree is an endemic species. According to historical records, it had once been common in upland Mauritian forests and was often exploited for lumber. According to the original hypothesis of coextinction, set by Temple (1977) based on a traditional belief of Mauritius people: “In response to intense exploitation of its fruits by dodos, S. grandifolium evolved an extremely thick endocarp as a protection for its seeds; seeds surrounded by thin-walled pits would have been destroyed in the dodo’s gizzard. These specialized, thick-walled pits could withstand ingestion by dodos, but the seeds within were unable to germinate without first being abraded and scarified in the gizzard of a dodo.” 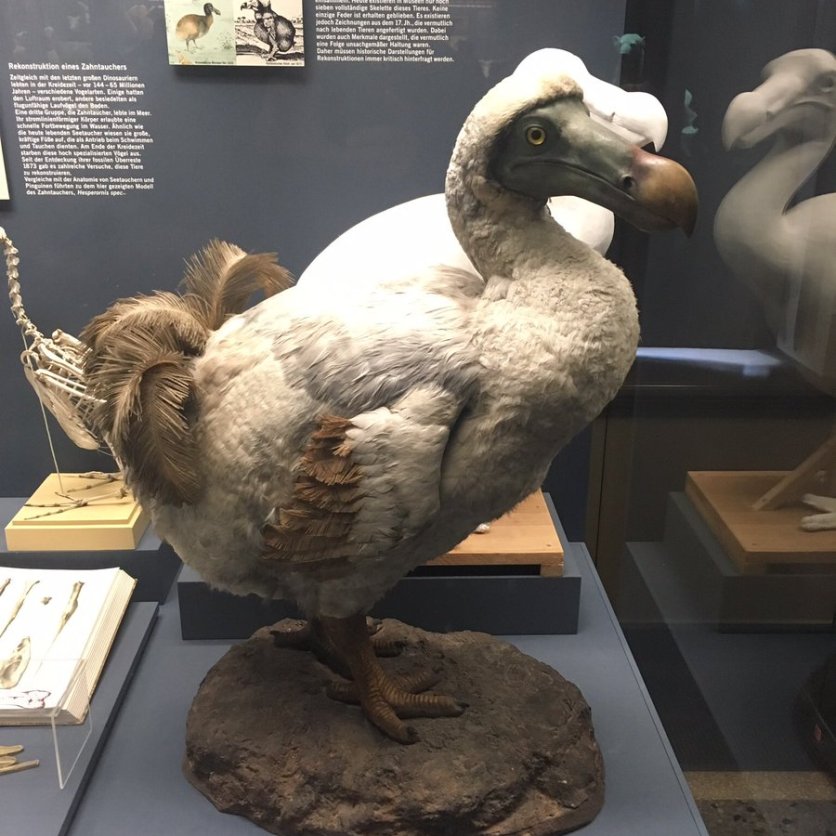 Dodos were large-bodied birds, averaging- according to the most recent estimates- 10 kg and reaching up to 12 kg (previous estimates reported up to ~21 kg). The beak was very robust, ~5 cm gape width, probably apt to handle and swallow very large fruits as well as other plant material.

Coextinctions are extremely difficult to demonstrate, especially for interactions involving, e.g., small species (e.g., ectoparasites and hosts) and species involved in generalized interactions (plant-animal mutualisms for pollination and seed dispersal). Yet we have many evidences for functional coextinctions, happening when species become very rare (even extinct) and their ecological roles are lost. Dodos and tambalacoques probably illustrate this. S. grandifolium has persisted on the island likely because of haphazard dispersal by other dispersal agents (e.g., giant skinks and turtles) and rare instances of runoff, etc. Seeds have been found germinating in some cases, yet with very low proportions; while pulp removal was required for germination, it appears that seed scarification does not improve germination significantly. And dodos may had the ability to crack the hard seeds during digestion. Yet there is no proper test available about of all these aspects, as far as I know.

The tree still remains in relict stands but juveniles can be found. The dispersal has certainly collapsed, yet with no final effect entailing the extinction of the tree on the island. Probably many local stands of S. grandifolium have disappeared since dodo’s extinction ca. 400 yr ago. Recent analyses of rich fossil plant and animal remains in lowland Mauritius include many S. grandifolium seeds associated with dodo and giant turtle remains. But it seems we are not in front of a tightly coevolved one-to-one instance of pairwise coevolution. Most likely, not simply the dodo extinction contributed to the rarity of tamabalacoques on Mauritius (and several other large-seeded trees): competition with exotic species, were most likely fundamental. Introduced species included Javan deer, goat, pig, crab-eating macaque, and black rat were clear contributors for the dodo’s extinction by destroying the understory vegetation, competing for food sources, and, in the case of the pig, macaque, and black rat, direct predation on eggs and chicks.

Independently of whether the initial reports of coextinction due to loss of the mutualistic dodo were wrong, or biased, or both, the system reflects what happens when ecological interactions are lost: we simply see highly altered systems that remain extremely difficult- or even impossible- to resurrect. And oftentimes the extinction of interactions precedes by a long time the extinction of species, so that what we see is the pervasive effect of the debt of lost interactions.