We all use the general libraries for data analysis and model fitting, but a nice thing with R is that you can interface any function with others. And a bunch of packages have been developed with ecological research in mind. Recently, Scott Chamberlain posted a good  summary of new R libraries specifically useful for ecologists.

Dolph Schluter‘s page and Rodney Dyer‘s page have interesting tips for using R in evolutionary ecology and population genetics, respectively. An additional R resource for ecologists is the R programming resource center at NCEAS and the CRAN Task View for Analysis of Ecological and Environmental Data. Finally, ecological analysis with R was the core subject of a special issue of the Journal of Statistical Software in 2007.

Here is my summary of useful R packages for ecologists. I’m including here those packages that I consider more directly related to ecology and that I’ve used most. Obviously we all use many R packages for ecological research, but the idea here is to summarize those that specifically address ecological research. Some of those libraries might remain “hidden” amidst the zillions of libraries available in R. useRs interested in ecological research should consult additional R Task Views, such as the Spatial view. Additional interesting stuff for ecologists is also available in the Genetics, Multivariate, Phylogenetics and Cluster task views, among others.

ade4. Analysis of ecological data with exploratory and euclidean methods in environmental sciences. Basically a series of functions for multivariate data analysis and graphics. true web page is here. It also has a GUI (graphic user interface), ade4TkGUI.

adehabitatHR. A collection of tools for the estimation of home range in animals.

adehabitatHS. A collection of tools for the analysis of habitat selection by animals.

adehabitatLT. A collection of tools for the analysis of animal movement patterns.

vegan. Ordination methods, diversity analysis and other functions for community and vegetation ecologists.

ecodist. Dissimilarity-based analysis functions including ordination and Mantel test functions, intended for use with spatial and community data.

popbio. Analysis of matrix population models. Construct and analyze projection matrix models from a demography study of marked individuals classified by age or stage. The package covers methods described in Matrix Population Models by Caswell (2001) and Quantitative Conservation Biology by Morris and Doak (2002).

BioMod. Functions for ensemble forecasting of species distributions, enabling the treatment of a range of methodological uncertainties in models and the examination of species-environment relationships. Thuillier et al. 2009. Ecography 32, 369–373. doi: 10.1111/j.1600-0587.2008.05742.x.

simecol. Simulation of ecological (and other) dynamic systems. Object oriented framework to simulate ecological (and other) dynamic systems. It can be used for differential equations, individual-based (or agent-based) and other models as well. The package helps to organize scenarios (avoids copy and paste) and improves readability and usability of code.

spdep. Spatial dependence: weighting schemes, statistics and models. A collection of functions to create spatial weights matrix objects from polygon contiguities, from point patterns by distance and tesselations, for summarising these objects, and for permitting their use in spatial data analysis, including regional aggregation by minimum spanning tree; a collection of tests for spatial autocorrelation, including global Moran’s I, APLE, Geary’s C, Hubert/Mantel general cross product statistic, etc.

Molecular ecology. Also see the Genetics R Task View. useRs interested in ecological genomics should have a look to Bioconductor and the RGenetics Project.

Geneland. Functions for detecting spatial structures from genetic data within a Bayesian framework via MCMC estimation.

I don’t like the name ‘network ecology’, but you probably know what I mean. R libraries developed by social scientists (e.g., sna) provide many useful functions for ecological research.

bipartite. Visualising bipartite networks and calculating some (ecological) indices. Bipartite provides functions to visualise webs and calculate a series of indices commonly used to describe pattern in ecological webs. It focusses on webs consisting of only two trophic levels, e.g. pollination webs or predator-prey-webs. Visualisation is important to get an idea of what we are actually looking at, while the indices summarise different aspects of the webs topology.

ape. Analyses of phylogenetics and evolution.

adephylo. Exploratory analyses for the phylogenetic comparative method. Multivariate tools to analyze comparative data, i.e. a phylogeny and some traits measured for each taxa., community analyses, null-models, traits and evolution in R.

phylobase. Base package for phylogenetic structures and comparative data.

ouch. Fit and compare Ornstein-Uhlenbeck models for evolution along a phylogenetic tree.

Note: To automatically install the R Task Views (i.e., groups of packages useful for some specific analysis and pre-bundled in CRAN), the ctv package needs to be installed, e.g.: 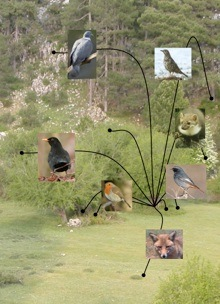 We have just published our paper “Jordano, P., C. García, J.A. Godoy, and J.L. García-Castaño. 2007. Differential contribution of frugivores to complex seed dispersal patterns. Proceedings National Academy of Sciences USA, 104: 3278-3282”. These are great news since it represents a great advance in the analysis of frugivore-created seed shadows. We document the differential contribution of different frugivore groups to seeds dispersed a given distance, using direct assignement procedires based on DNA genotyping methods. At the moment it’s the first approximation we have available to the total dispersal kernel of a plant species.
The paper has been extensively commented in the ‘Perspectives in Science’ section of Science journal. Please see the publications list for details.